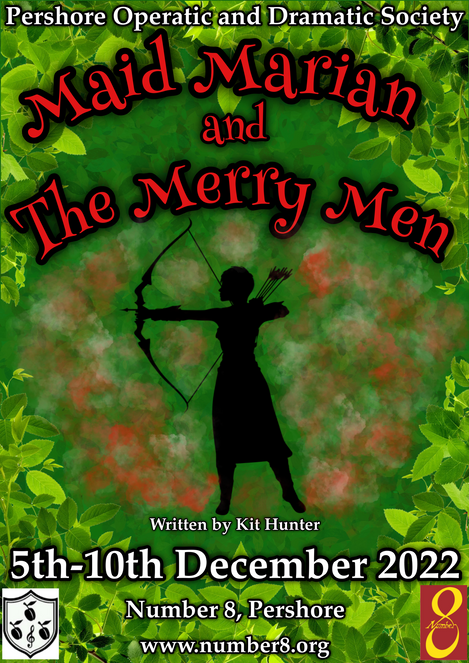 Maid Marian and The Merry Men

The town of Nottingham is plagued by the mean Sheriff, who keeps

squeezing the peasants for more and more tax money. Some one needs

to stop him ! If only the town could find Robin Hood.

to look for him and help him overthrow the Sheriff. When she finds Robin things are not quite as his reputation suggests. Robin loves to write songs, bake cakes and compose poems. It looks like it's time for some girl power!

With Marian leading the Merry Men, can they get rid of the evil Sheriff and

his idiot Nephew and make Nottingham a lovely place to live?

Written by Kit Hunter and Directed by our very own first-time directors Hannah Burton and Lindsey Kirby, this hilarious new take on the Robin Hood legend stretches preconceptions further than Marian's longbow, and will leave you dancing through the tears of laughter !

Congratulations to our cast who successfully auditioned for the show,

and in September the hard work of rehearsal and production begins !

Follow our social media channels for the latest info.

Have a great summer, and we look forward to welcoming you to Number 8 for

Maid Marian and The Merry Men !

took Pershore Operatic and Dramatic Society to new heights, with a discerning audience

knowing an amazing performance when they saw and heard one !

No opening night jitters in this show, as early applause built as the show went on, through to loud cheers of appreciation and a long and well-deserved first night standing ovation.

By Tuesday morning the word was all over Pershore, and the last few tickets were selling fast.

By Wednesday the remaining shows were sold out, with anxious people calling the box office and asking for returns !

That rapturous applause and standing ovation on the opening night, was followed by even greater appreciation every night thereafter, and a huge wave of glowing reviews have come from every

direction. From people in the street, via email, across social media, and on BBC Local radio.

As the curtain falls on our show, under the direction of Judy Megarry, PODS have done it again,

and Pershore is Mad About Musicals ! 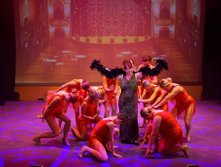 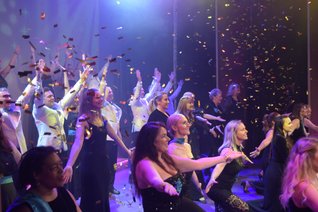 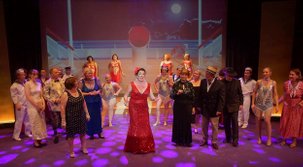 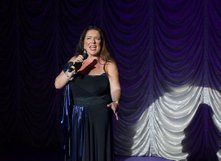 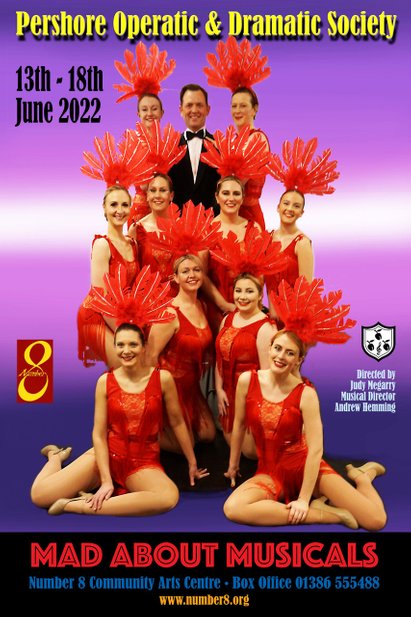 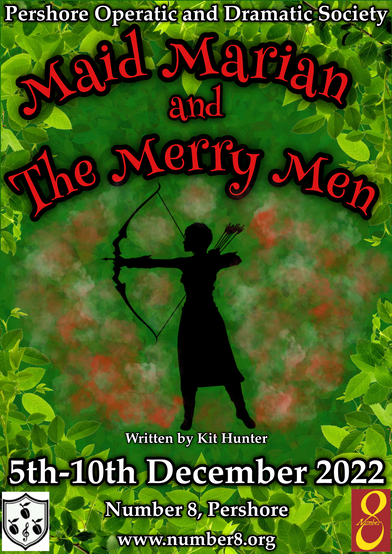 We are really pleased to announce a change to our show programme for Christmas 2022,

and that our Christmas show for this year will be

'Maid Marian and The Merry Men'

Written by Kit Hunter and Directed by our very own first-time Directors Hannah Burton and Lindsey Kirby, this hilarious new take on the Robin Hood legend stretches preconceptions further than Marian's longbow string, and will leave you dancing through the tears of laughter !

Auditions will be held in July so budding outlaws get in touch !

On Bank holiday Monday 2nd May, Pershore was treated to the spectacular carnival procession celebrating the Queen's Platinum Jubilee, with the theme "1952 to 2022: Inventions of the past 70 years".

While not taking part in the procession this year, PODS members, and cast and crew of our forthcoming show 'Mad About Musicals' entertained the crowds with music from well-known Broadway and West End shows, while taking the opportunity to publicise the show. 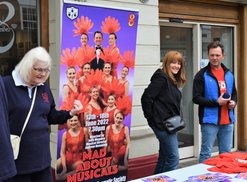 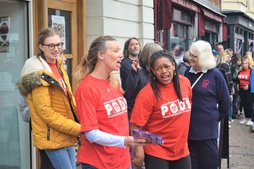 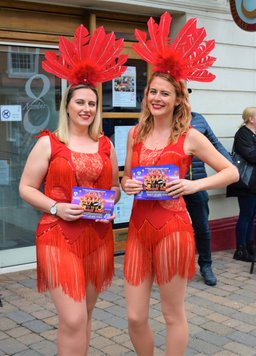 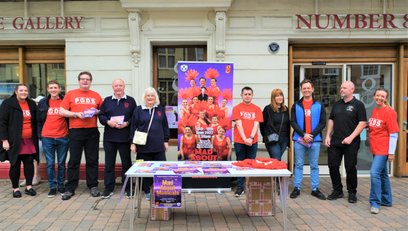 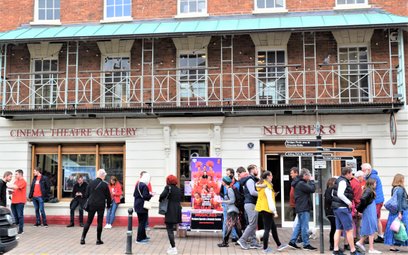 Find out more about Pershore Carnival

On April 22nd Members, former members, patrons, and partners flocked to the annual

Players and families competed for the Andrew Clasen Memorial Cup, kindly donated by

Sue Clasen in memory of Andrew – a great supporter of PODS.

A nail-biting skittles competition was rounded off perfectly with a fish ‘n chip supper,

consolation for those whose skittles ability failed to make the grade !

A superb lesson in skittles from Lucy Miller won the night, and her victory was crowned beautifully by the presentation of the Andrew Clasen Memorial Cup by Sue Clasen.

During the evening we also took the opportunity to present NODA Long service awards to Sue Price and Brian Ireland. 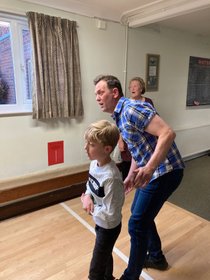 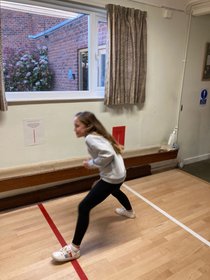 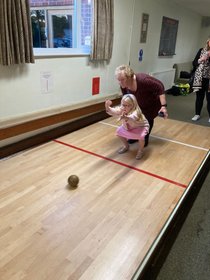 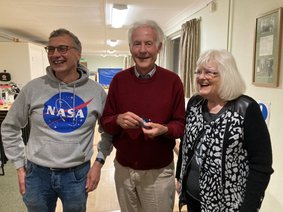 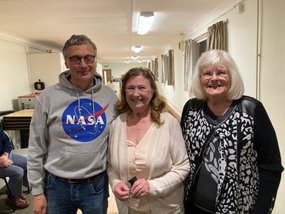 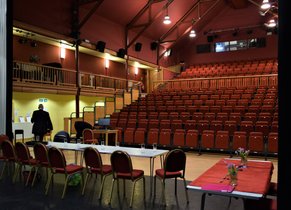 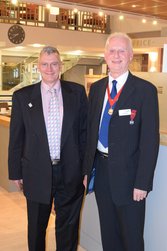 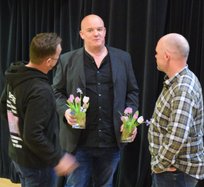 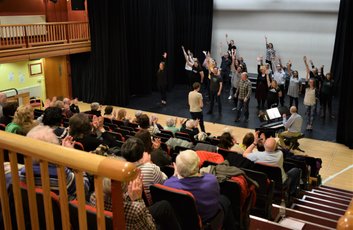 On Wednesday 6th April PODS members, patron, and show volunteers gathered in number in the auditorium in Number 8 for our 2022 Annual General Meeting.

Using the long Covid break as motivation to do things differently, the society tried out a less formal and hopefully more engaging format for our comeback AGM. With much of the formal reporting having been communicated to everyone ahead of the meeting in PODS' spring newsletter, the stage was set for a slick and entertaining AGM.

Outgoing Chair David Hemming gave a moving address, thanking everyone for their support during his term at the helm, through the unprecedented and extremely challenging Covid pandemic, before announcing the newly elected committee for 2022-23.

Allan Brodie addressed the meeting on behalf of Number 8 and spoke warmly about the importance of the special relationship between Number 8 and PODS as the resident theatrical company and close working partner.

We were fortunate to have NODA's Bruce Wyatt in attendance to present long-service awards to a number of society members, including Diana Miller, accepting her award for a magnificent 70 years of service to amateur theatre.

With the formal business of the meeting drawing to a close, the cast of our forthcoming production 'Mad About Musicals' treated members, volunteers and patrons to a performance of 'A Musical' featured in the show.

Tickets go on sale for 'Mad About Musicals' 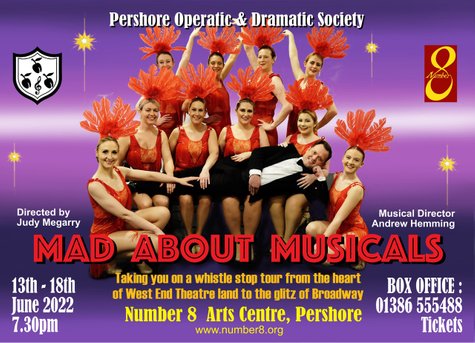 We are pleased to announce that on Friday 11th February tickets went on sale for our forthcoming show, Mad About Musicals, at Number 8 Pershore, from 13th-18th June 2022

Directed by Judy Megarry and taking you on a whistle stop tour from the heart of West End theatreland to the glitz of Broadway, PODS will celebrate the very best songs from classic and contemporary musicals.

A slice of pure entertainment!

Directed by Judy Megarry with musical direction by

Our web page and social media sites are being revamped and updated for our return from the pandemic, as we look forward to a new year of spectacular shows !

Why not follow us or contribute on your favourite channel ? 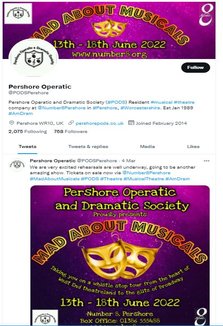 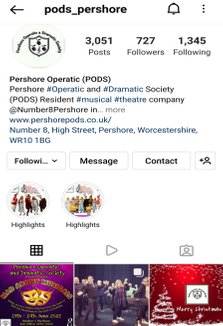 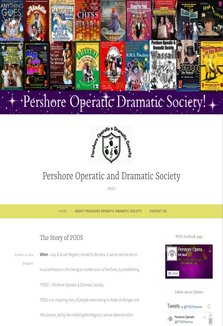 We're Back in business !

As the pandemic began to recede and life began a tentative return to normal with the relaxing of retrictions,

PODS determination to be at the forefront of returning to the stage brought the theatre at Number 8 back to life.

It was at this point that Victoria Annis and Matt Owens took the plunge, and applied their well-established stage talent to the twin challenges of Producing and Directing a show for their first time, while steering the cast and crew safely through constantly changing Covid rules. Supported by the talented Andrew Hemming as musical director, PODS were back.

With pent up enthusiasm and the combined talent of our cast and production crew finally unleashed, PODS set about bringing live theatre back to Number 8.

Sizeable audiences flocked to Number 8 to see the first live shows in 18 months, and they were rewarded with a spectacular, modern and energetic production of 'Snow White'.

See the NODA review by Bruce Wyatt on our 'PODS and our Productions' page. 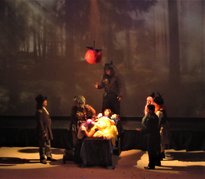 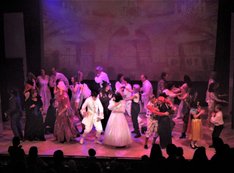 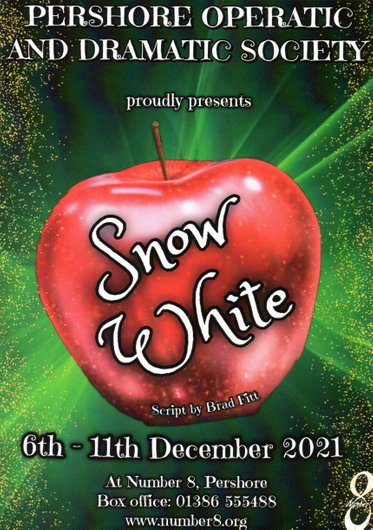 The day the lights went out 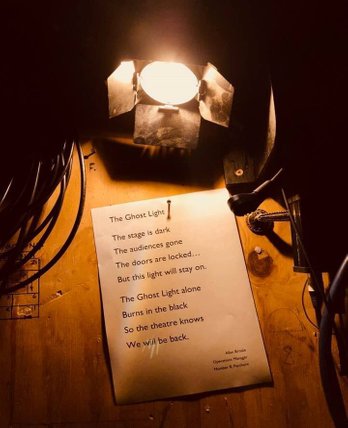 As time went on through March it became clear that Covid was spreading rapidly across the whole world, and that all areas of life including entertainment and live theatre would be unlikely to escape.

On 16th March the government announced lockdown measures including the temporary closure of all theatres.

Our rehearsals for 'Chicago' have been suspended until further notice and Number 8 is now closed. 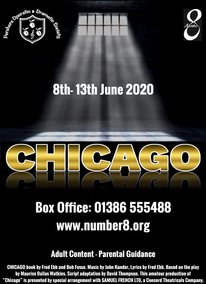 PODS is a member of NODA

Please ask permission before reproducing anything from this site